Start typing and press
Enter to search
Skip to content

I work in an upcoming startup in Bengaluru, which doesn’t give holidays even for festivals. My Indian culture is very rich in festivals and celebrations and I too grew up looking up to all these celebrations and waiting for them. So, being in my first year, when I came to know that this particular place does not give holidays even on important festivals, I felt a little rebellious. So, decided to take the day off anyway. The question now was what to do with the day. The first bus that I saw went to Bannerghatta National Park. I was in no mood to go and see the sorry state of the animals in the national park since I have been there before. Even though it is supposed to be in ‘in situ‘ conservation zone, the animals are tranquilized (fact confirmed by a guide) and displayed for public. So, I am not a fan of this particular National Park. But I had another option, the ‘Butterfly Park‘. I was curious about how they maintain a butterfly park, since I have never visited one before. So, Butterfly Park it was!

The butterfly park, inside the Bannerghatta National Park campus, houses a garden for all the local butterfly population, a Butterfly conservatory, where all the not-so-common butterflies are kept, a museum which has video shows for visitors, a captive breeding area (not open for public) and a laboratory (which the public is not much interested in!).

I entered the garden first, where lots of yellow butterflies were hovering around. I loved the flora of the garden, with flowers of all possible colors. It had neatly kept lawns, with benches to rest and swings for kids. There were uniformed guys working on the garden. One of them had a net to collect the butterflies. When I asked him the purpose of catching them, he said they were to be introduced into the conservatory. I sat for sometime watching them work and the butterflies dancing around, fearless of the people around.

The conservatory has a fascinating entrance, in the shape of a giant butterfly. It has a dome shaped roof with lots of pots hung upside down on the ceiling. This is for the butterflies to rest and roost. Plants specifically preferred by the butterflies are grown inside. Again my curiosity led me to pester a uniformed guy to know more. This guy is a native of Anekal. So, I call him Mr Anekal here to avoid any defamation suit on me if he ever happens to read this! So, thanks to him, now I know that citrus plant is loved by three Mormon butterflies – common, blue and black. The Capparis plant hosts 7 different butterflies, the names of which our Mr Anekal reeled off effortlessly, igniting a little jealousy in me. I love butterflies. But I never took any interest to know more than what the textbooks taught about their life cycles. He showed me another plant, the name of which I couldn’t even note down because he had no clue how to spell it and I had no clue how he was pronouncing it. So, this plant hosts 5 different butterflies. 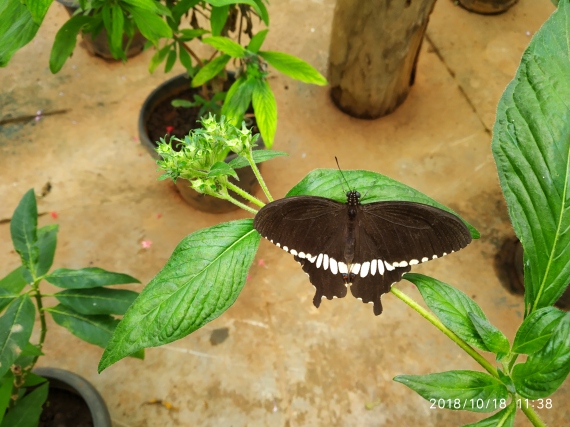 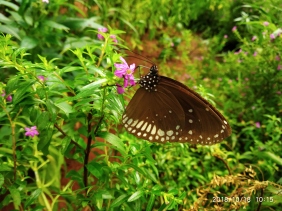 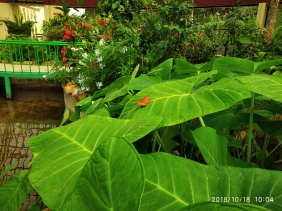 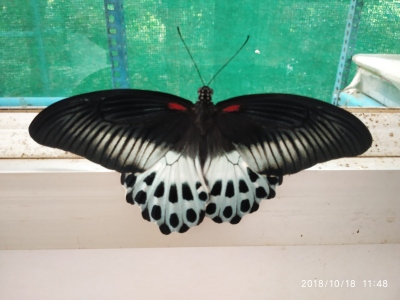 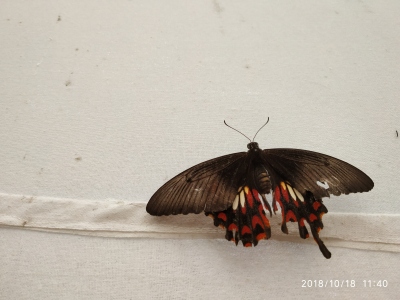 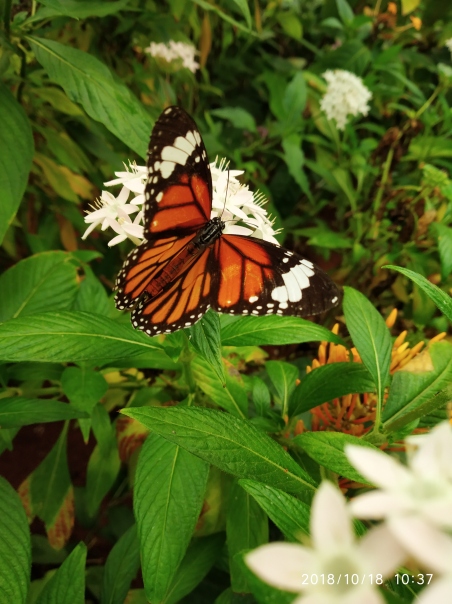 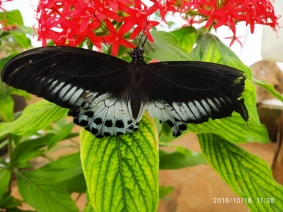 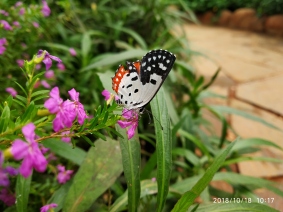 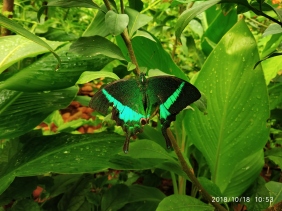 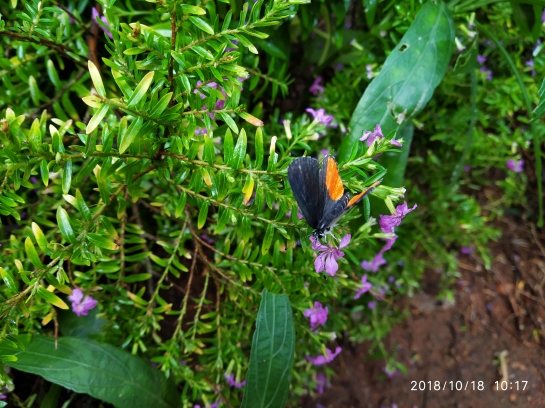 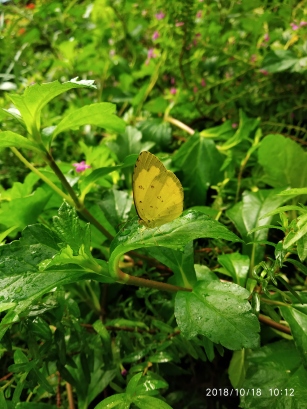 I do envy how he knew his butterflies inside out. He took me further into the conservatory and showed me eggs, pupae and caterpillars of various butterflies. He seemed to be able to identify each to their respective parent butterflies. One particular set of eggs – minute yellow round ones – flooded my brain with memories of my attempt to grow cherry tomatoes. I had seen these little yellow eggs on my cherry tomato leaves and mistook them as the mealy bugs which had already infested my other plants. One of those days, when I was feeling irritated about the pests destroying my herbs, I had taken time to go through all my plants to pick each one of them, including these eggs and put them in water with Neem oil with every intention to destroy them. A slight twinge of remorse did cloud me for a while thinking how many potential butterflies I had killed unknowingly. He showed me a nasty looking caterpillar, which also I recognized as the worm that ate up all my oregano plant and a couple of them, I had picked up thrown away mercilessly just a couple of months back! I pitied my ignorance and inability to identify something as simple as a caterpillar and pupa. At the end of the class by Mr Anekal, he coyly told me that he works on daily wages and stood there scratching his head. I smiled and continued looking around. He didn’t move. Then Suddenly I remembered a friend telling me that scratching of head and that puppy dog look means the person is expecting a tip! I took out a 50 Rupee note and he happily took it and bounced off. 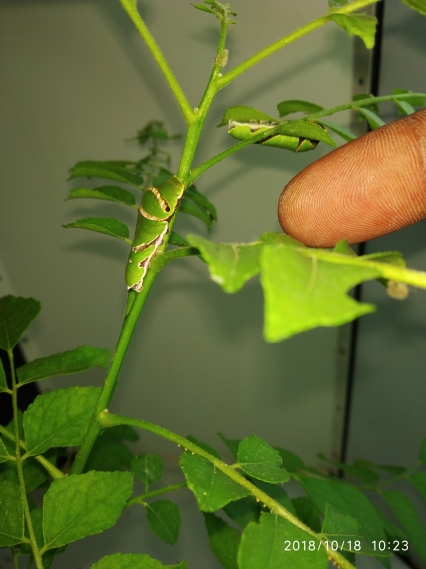 The pupae of common mormon 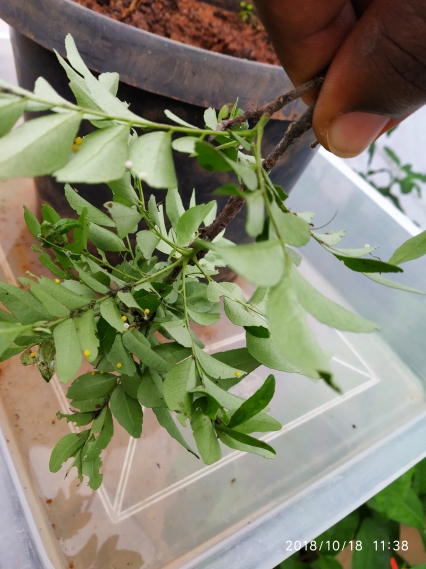 The eggs of common mormon

I saw a person putting cotton on the artificial flowers kept in the conservatory. On enquiry, he informed that the cotton was soaked with honey – Dabur honey – to fool the butterflies into feeding from the artificial flowers. This was done so that enough honey would be available for the butterflies to feed on. So, this brand has some winged customers!

I took up a task to learn more of the butterflies and decided to get maximum snaps of different butterflies in the conservatory. I hovered after the butterflies for over two hours. That’s when another of our uniformed guys came over and told me to wait for the Blue Mormon to come up. Blue Mormon is the second largest butterfly in India and the State Butterfly of Maharashtra. I did not know, till then that, we had state butterflies too! He also showed me a pic of it to help me identify it. I waited for this elusive ones to come up. No use. By that time, more visitors started pouring in and it became impossible to look for the Blue Mormon. I had a pocket notebook and pen and a back pack which might have given a scholarly appearance. This might have been the reason I had people giving me tips about butterflies without scratching their heads. I had spent close to three hours in the conservatory and looking lost when the same guy who tipped me about the Blue Moron came and directed another guy to look for the Blue Mormon and show it to me. This guy checked all bushes, shook all trees but no signs of any Blue Mormon. After some time, I was exhausted and proceeded to the museum, where all the scientific data on butterflies and their evolution was exhibited. I had no interest in any of these by now as my head was full of Blue Mormon and I was making a mental image of how it would be like.

After waiting for a while, I had no luck with the giant butterfly. I went out feeling all lost because I so badly wanted to see how big this second largest butterfly would be. By now, I had made up an image of a blue colored butterfly of the size of a small bat. Then, the person who had scored the conservatory for me, came up to me and asked what exact detail I wanted about butterflies. I said Blue Mormon. he was like, ‘Ohh you want only the Blue Mormon, hmmm… there are no scientists here too today…’ He thought for a moment, looked around and asked me to follow him. I was hesitant at first, but then decided to take the risk, calling upon the God to be with me in all my stupidities. He took me to a totally different world, the one not open for the public – into a captive breeding zone. There were two tents where butterflies were bred in captivity. he open the first tent asked me to get in and closed it immediately. Inside was a a butterfly haven! Butterflies of all colors flew in that little tent. The host plants were kept in trays of water to prevent ants from eating up the eggs. Among the flying wonders, he pointed to me the elusive Blue Mormon, sitting regally on the wall. It instantly shattered the image  I had made up in my brain! Still was bigger than all the butterflies I had seen there and beautiful too.

He showed me a male and a female Blue Mormon and taught me how to identify a male from a female. So, the male butterflies of any species are smaller than the female and has a lifespan of only upto 7 days, while a female is bigger and lives up to 15 days. Nature gave a female extra 7 days do lay eggs and make sure that more of their kind were created. Males have a black wing spot on both hind wings which is the major identifier of the sex. He pointed out many more species and allowed me to take any number of clicks.

He next led me to the eggs and pupae area, where, in different neatly labelled tray covered with cloths were a collection of pupae and eggs of different butterflies, at different stages of their life cycle. When the pupae were ready to emerge, they were introduced into the conservatory. He showed me the most prized possession among them –  the caterpillar of the Southern Birdwing –  the largest butterfly found in India, and the State Butterfly of Karnataka. It was bigger than all the caterpillars I have ever seen. He asked me to touch it to feel its black velvety texture. I normally hate all wriggly things. But I didn’t want him to see that my cold feet in this matter. So, mustering all my courage, I touched the caterpillar and ran my fingers on its back. It indeed was velvety. He said they were all waiting for it to emerge as a butterfly and mate with the partner they had in another tray and breed more of these stately butterflies. He let me look through all the trays. and click pics of the breeding facility. He left silently without scratching his head! I wandered around for a few minutes, saw their lab facilities. My guide left me to linger along , and surprisingly, without scratching his head! 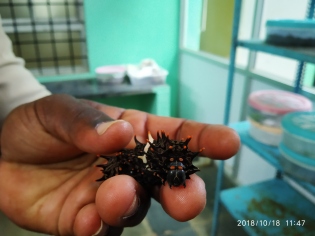 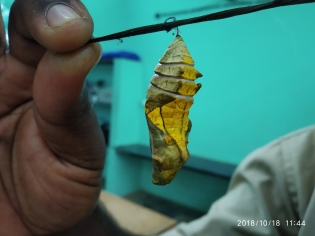 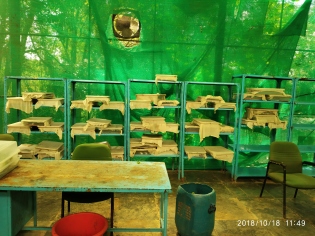 After satiating my curiosity about butterflies and happy that I could identify butterfly eggs and caterpillar and pupae, next time I spot them on my plants, I came out. I searched for my guide, and thanked him profusely. He told his name was Raja. I wanted to tip him but he wouldn’t take it. I thanked him again and started on my way out. 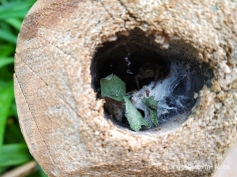 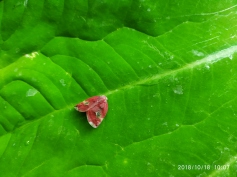 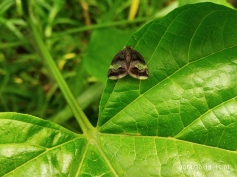 So, I had a good day. I learnt a lot about butterflies and their hosts. I am, now, confident about designing my own little butterfly garden whenever I have a yard of my own. The day also somehow, reinforced my faith that there are still decent people around who don’t scratch their heads!

3 replies to A Winged Lesson

This site uses Akismet to reduce spam. Learn how your comment data is processed.